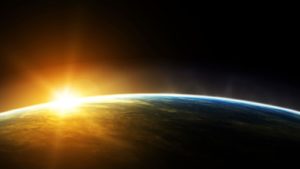 Despite many popular beliefs and creationists views, the creation of the earth was not on the first day of creation.  Before the first day, earth was originally a dark abyss like world, a great chasm of chaotic waters that existed.  As the Spirit of God began to hover over this, God spoke. Light, life, and order were brought into that place, forming the earth that we live on today.  From the passage above we see one of the most powerful functions of the Spirit of God.  Where there is darkness, chaos, and emptiness, the Spirit of God broods and hovers over, relaying back to God the Father to send light.
Frustrated and still upset from a recent phone call with his wife a few days ago, a middle aged man out of town on a business trip staggers into the hotel room around midnight.  Drenched in sweat, and the smell of alcohol perforating out his body, he makes his way to the bedroom with an unknown stranger wrapped around his right arm.  Inside he feels empty and angry. An immense gulf of chaotic abyss lives within him. Darkness is over the surface of his deep.  As he comes across the wedding band tucked in his shirt pocket, the thought runs through his mind, “she will never find out, and maybe she’s doing the same thing, after all, she doesn’t really love me anyways”.  Meanwhile, his 22 year old son, who just got put in jail for underage possession and intent to distribute, leans his head against the cold cell bars with shame and guilt in his heart. Also at the same moment in time, their 8 year old daughter back home lies silently in her bed weeping on her pillow as she thinks back on the horrible fight that her parents had earlier that week.  She gazes over at the empty bed next to her which her brother slept in and prays softly while tears run down her cheeks, “God, if you exist, will you help my family?”
The story above is an example of the reality that many broken families are dealing with across this world. When the Spirit of God hovers over their darkness and chaos, He relays back to God the Father “Speak Light! Speak Light!”  When we see those that are broken and in darkness, we should intercede as well and bring the same petition to the Father, “speak light to these hurting people oh God, speak your Word, Jesus, to them, so that their darkness, despair, and emptiness may be replaced with your light, life, love, and order.  Above all, use me to be Your voice to them, so that they may be a new creation in Christ Jesus.

This site uses Akismet to reduce spam. Learn how your comment data is processed.